Prayag means confluence. In Devprayag, two rivers Alaknanda and Bhagirathi both merges and get the name Ganga. Devprayag Sangam – Where the name Ganga Originates.

After spending one full day in Rishikesh on the lap of Ganga, next day early morning, I started moving towards Kedarnath through Devprayag, Rudraprayag, and Guptakashi.

Devprayag is a small town and it is around 70 KM from Rishikesh, Uttarakhand.

On my journey towards Devprayag, I witnessed the majesty of Himalayas. One side is full of Himalayan range and another side, mighty Ganga flows towards south. When we are in Himalayas, the journey won’t be great if we don’t remember the majestic verses of Mahakavi Kalidasa from his magnum opus Kumara Sambhavam.

I am quoting few verses from Kalidasa’s Kumara Sambhavam.

(Himalayas, situated on northern frontier of Bharata, Protect Bharatavarsh and its civilization from invaders & icy winds from Arctic, Himalayas is ensouled by its divinity, Himalayas – Supreme King among all the mountains, spread between eastern & western side of the ocean, hence, seems to be a measuring rod to measure the earth)

(Himalayas, the land for various medicinal herbs and invaluable treasures, the prevailing snow doesn’t desecrate its beauty. Similar to the moon where rays of the moon doesn’t allow desecration of its exquisite beauty due to its speckles. All innumerable virtues of Himalayas subsume one blot of it called snow)

Stopped our mini bus on roadside and walked inside Devprayag. This town is as usual other all pilgrimage spots in north India with narrow paths. I crossed the Bhagirathi through hanging bridge and reached the Sangam spot.

I was standing towards south side. Bhagirathi was flowing on my right hand side with roaring like a lion. Alaknanda is coming from my left hand side. Both are getting merged in front of me and flowing southwards as an ever holy Ganga.

The river Alaknanda is coming from the glaciers beyond Badrinath and considered as a Vishnu Pada tirtham since it flows through Badrinath. Similarly, Bhagirathi is coming from “Gowmuki” beyond Gangotri and believed to be come from Shiva’s head.

Hence, this is not alone the confluence of two Himalayan rivers but

The great Vishnu bhaktha from Tamil nadu “Periyazhwar / Vishnu chithar” came here on 6th-8th century. He sung 10 verses in Tamil about Devprayag. I slightly dipped into some of his classic legendary verses about this Devprayag Sangam.

I am just writing here the essence of his verses and original Tamil texts can be read in this hyperlink.

Second verse – “the flower from Shiva’s head and Tulsi leaves from Vishnu’s foot both are meeting in Devprayag and this divinity is flowing as a Ganga”.

Third verse – “Ganga was in the Kamandalu of Brahma, Vishnu’s feet and Shiva’s head” (he explained in two lines the entire story of Ganga)

Fifth verse – he describes her divinity that “She has the potential to wash out all the sins accumulated by us in our previous birth”.

Nineth verse – Periyazhwar says about the speed of Ganga that “the speed at which Ganga flows, shaking big big mountains, breaking the earth, big big trees are flowing and the ocean itself is getting shiver due to her unmeasurable speed”.

Devprayag is one among the five Prayag (‘Pancha Prayag’) situated enroute to Badrinath. In each of these Prayag, other rivers are merging with Alaknanda. In Devprayag Sangam, Where the name Ganga originates. Further, the river is being called only as a Ganga.

This place Devprayag got this name since the rishi Dev rishi Sharma did the penance and attained mukthi here. Due to this, the area situated around the “Alaknanda Bhagirathi Prayag” called as a Devprayag.

If we see the Alaknanda and Bhagirathi Sangam,

Oh, what majesty it is, what a speed she is flowing,

What a speed both rivers are meeting each other and what a speed Ganga is flowing southwards, oh my sacred mother Ganga, why this much speed? Why?

What else Ganga would tell us apart from saying that am flowing with much speed to wash out all the sins of humanity, to make this Bharata ‘the land of lords’ ever sacred, to keep this thriving civilization ever stand tall, to enrich the mahakshetras situated on my banks, to spread the divinity throughout the route and without forgetting to feed the millions of humanity,

In Earlier days like 80-100 years before, Devprayag was small village and Badrinath temple pandits were staying. If anyone does the pilgrimage to Badrinath or Kedarnath, they would reach Devprayag first. If their health was good, they would march ahead further. Suppose, if their health gets deteriorated in Devprayag, they wouldn’t continue further. Hence, it was purely depending on their health status when they reach Devprayag. This Badri Kedar yatra was such a hard pilgrimage. Our ancestors wholeheartedly did it just for what, nothing other than pure devotion to Shri Parameshwara and Bhagwan Shri Hari.

At present modern pilgrimage, there is hardly any difficulty and am really wondering what good deeds we would get by doing pilgrimage with these modern amenities.

On the backdrop of mesmerising Himalayas, I started getting downside through narrow steps in Sangam ghat and with the help of iron chains, did my second Ganga Snanam and unforgettable Devprayag Sangam Snanam.

Post Snanam, I climbed around 100 steps and reached Raghunath ji Mandir of Devprayag. 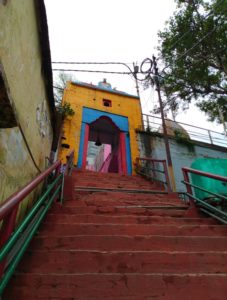 This temple is one among the 108 divyadesams (Vishnu shrines) as per Shri Vaishnava sampradaya. Divyadesams are particularly visited by “Azhwars’ (Tamil saints) and they did “mangalasasanam” (praising the lord through tamil verses). Collection of these classic Tamil verses is named as “nalayira divya prabandams”.

This Devprayag temple is one among such 108 divya desams. Vishnu chithar / Periyazhwar came here around 6th-8th centuries during his pilgrimage to Himalayas and praised Raghunath ji of Devprayag.

As per his Tamil verses, this Devprayag is called as “Kandam enum Kadinagar”. He sung 10 verses on Raghunath ji & Devprayag. I have quoted above these same verses.

There was story available behind why Periyazhwar came to Devprayag. As per this story, there was drought at that point in time (6th-8th century). Raghunath ji came in the dreams of devotees and requested them to bring Periyazhwar/Vishnuchithar from Srivilliputhur (in Tamil nadu). When Periyazhwar reached the Devprayag and did the mangalasasanam on Raghunath ji, there was heavy rain and village got flourished.

It is really amazing that how a normal devotee came to Himalayas on that time just through walking and praised the Raghunath ji in TAMIZH verses. Later even he reached Joshimutt as well as Badrinath. Our Santana dharma alone unites the Bharat and Pilgrimage by fellow devotees further strengthens it, Pilgrimage is in our DNA there is no doubt that.

Raghunath ji is saligrama sila murthy and in standing posture with sudharshan chakra & Panjachanya sanku and wears bow & arrow in other hands. This is one of the places where Prabhu Ram did the penance and worshipped Shri Parameshwara to wash out sins of killing Ravana. The nearby places of Raghunath ji temple are believed to be the places where Prabhu Shri Ram walked around. Near to temple, there is place “Ram Sila”. Where the foot prints of Prabhu Ram are there in the rock.

Inside Garbhagriha, Sri Devi, Boo Devi and Annapurna Devi are also there along with Shiva linga. Temple pandit told that the shiva linga was consecrated by Aadhi Shankaracharya. Opposite to Raghunath ji, Garuda Bhagawan is there in Prakara and Anjaneya also there.

Anjaneya sametha Sita Lakshmana Ramachandra murthi is utsava murthi here. When the pandit understood that we are from Tamil nadu. He immediately shown us the stambha. It has the particular verses inscribed in it.

When we came out of the temple and there is Kashi Viswanath mandir on our left side.

As per Shiva Mahapurana, There is a sloka in 11th chapter of Koti-Rudra-Samhita about Laliteshvar Mahadev in Devprayag. The sloka is as below,

Meaning – In Devprayag, There is Shiva linga called Laliteshvar. This shiva linga destroys all sins, which always has to be worshiped.

Dharshan of Raghunath ji, Devprayag Sangam on the backdrop of majestic Himalayan range is unforgettable.

How to reach Devprayag: